Book Group Questions for Queen of Bloody Everything

In the space of two hours I have had LITERALLY two emails asking if there are any book group questions for The Queen of Bloody Everything. There aren’t. Or there weren’t. Until now. Because I just thunk some up.

SPOILER ALERT: do not read until you’ve read the book or you will be minty.

– What makes a ‘good mother’ and how do Angela and Edie rank?

– Why does Dido go back to Jimmy and stay so long?

– Why doesn’t Dido ever seek out her father, or extended family?

– Should Edie have taken Harry for the abortion?

– Could you forgive Edie?

– Was Dido right to hold out for Tom for so long?

– Do you think Edie dies or survives?

This is how it started. A small boy I’d glimpsed on a street in Peckham, his sleeping bag on his back like a nylon snail.

From that came pages of notes about a boy called Tom, who eventually turned into Joe, who became the star of a book, and then a real boy again, who appeared in a TV series, which last night won its very own BAFTA. I’m still reeling from the ridiculousness and brilliance of it.

And as I didn’t get to dress up in my ballgown and parade like Cinderella (I fell over and hurt my knee and had to get the results on my sofa via Twitter), I have a few people to thank who all went into the making of the book and the TV series:

My old agent Sarah Molloy who told me to write the idea.

My new agent Julia Churchill who sold it.

My editor Karen Ball who bought it and then sold it again to Steven Andrew at Zodiak, who sold it to CBBC.

Nadine Marsh-Edwards who produced it, and Beryl Richards who directed it, and especially already-BAFTA-winning Guy Burt who wrote the scripts.

And the stars themselves: Daniel Frogson as Joe, Liani Samuel as Asha, Joe Sims as Dean, Kellie Shirley as Mum, Harrison Slater as Perry Fletcher, Tom Godwin as The Watcher, Erin Shanagher as Miss Granger, Shobu Kapoor as the social worker, and the wonderful Vas Blackwood as Otis. Thank you all. You’ve made one small boy, and me, very happy.

Here’s One I Made Earlier

As a child, I was a ‘keener’. A ‘swot’. A ‘geek’. Way before geeks were chic or had rows with nerds over which was which. And yet my ambition – to somehow be Queen of Facts, and win many spectacular prizes for this – was not borne out at all in my achievements. I shot for the moon and ended up not among the stars but still in a bland corner of North West Essex in my corduroy dungarees. The list of things I ‘won’ is short and disappointing:

Compare that to the list of things I Tried To Win and Did Not:

To be fair, the last one I didn’t actually try to win either, because by that point I assumed I knew the limits of my abilities, and they were fairly mediocre. But recently, life is making up for this catalogue of childhood oddity, because I finally, FINALLY won a Blue Peter badge. For doing star jumps in the TV studio with our illustrator Clare Elsom while Sir Chris Hoy drew stick woman versions of us. Which sounds somewhat feeble but when your last real exercise was in the Yoghurt Pot and Umbrella race in about 1980, and you bear in mind I had been up since 5am and not had a shower, then it is an act of undeniable brilliance. And if anyone tries to tell me otherwise I shall stick my fingers in my ears and sing ‘Genesis, Exodus…’ until we reach end of days.

You can watch me in this act of physical excellent here

We are BAFTA-nominated… and breathe 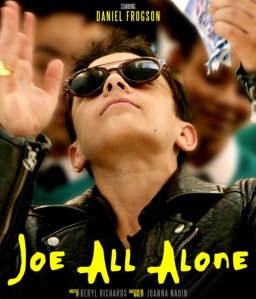 I wish I could be articulate about how much this means, to me, but more to the team who brought Joe to life and to a new audience. But mostly I’m too busy screaming, and trying to breathe.

(Pigeon) seeds of a story 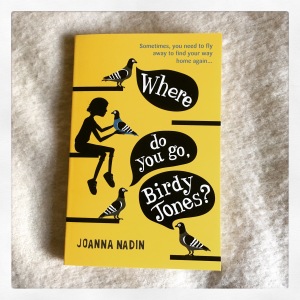 It began with a name, as it so often does for me: The Audacious Birdy Jones. But who she was, what she looked like, what her story was were blurry and inchoate, still lost somewhere in the soup of story that swirls in my head like the everlasting porridge pot.

Then came the birth certificate, magpied from another book entirely but handed to Birdy fresh and new and fledgling itself, setting her off on an adventure to find herself? Or her name. Or perhaps, even, her audacity.

Her squawk of an accent belonged to another little voice, a girl from a film I once saw, and the kids in the city I’d met on a visit, all ordinary and amazing. Her face, though, and hair are straight from the silver screen, from a shorn and scrawny twelve year old just finding her feet.

Dogger’s a ragtag mix, part Artful Dodger, part Son of Rambow, and played in my head by a boy I once knew at school, pale and freckled but busting with swagger.

And the birds? Seen in back sheds from a misted train window, they came last of all, but are the start and the end and everything in between.

And together they grew shoots of idea until they twined into a complex tale, of a boy who is lost, and then found, of a father who’s forgotten what that means, and of an audacious girl who needs to find out where she comes from to know where’s going.

Where Do You Go, Birdy Jones is out today. And you can buy it here.

Birdy Jones is all alone

Of all the questions I get asked on school visits, there are several perennials:

But the one that comes up time and time again, often several times in the same session, because, you know, attention span, is: ‘Where do you get your ideas from, Miss?’

I was asked it today at a bookshop signing, and I told the gobsmacked little girl the same as I tell all the other gobsmacked children: Mainly I steal them. Because it’s true. I magpie from everywhere. Bits and bobs and names and words and tiny little seeds. We all do it (even Shakespeare did it), but it’s what we do with it that stops it being plain theft.

In fact there were two eggs of ideas for Birdy. Firstly the name: Birdy Jones. I came across it somewhere (a newspaper perhaps?) and pocketed it (written it in my Book of Ideas), along with the word ‘audacious’ which is a delicious thing in itself. I knew then (about three years ago now) that I wanted to write a book about a girl called The Audacious Birdy Jones.  But who was Birdy? I had no idea and tried several out for size: small funny girls, older girls full of swank and swagger, but none seemed to take. Until one day, I was staying in a house by the sea with another writer called Liz Kessler, who lent me a book she’d just read, about someone who thought their dad wasn’t their real dad.

As soon as I got to that bit I stopped reading. What would happen, I wondered, if a much younger girl or boy found their birth certificate, and the man they thought was their father wasn’t on it. What if just said: ‘Unknown’. And so the egg began to incubate with more questions: What if the girl who found it was struggling to work out who she was? What if her real mam had died and she was living with her supposed dad and stepmam? What if she decided to go and find her real dad? And then the final, obvious question: what if the girl was called Birdy Jones? Only she didn’t feel audacious at all. Not yet.

The pigeons came from the film Little Voice. The names of the birds from the 1970s Leeds United line-up. The dad from Game of Thrones (imagine Sean Bean when you’re reading it). And Birdy herself is played by Eleven from Stranger Things, at least in my head (only with a Leeds accent). Little bits of sparkle stolen and shone up and turned into something new.

On Friday, someone asked me how different my life was a decade ago. And other than the Menace being smaller and markedly more menacing, and my home being two roads away, I said it barely was. ten years ago I was writing for a living, working several other (albeit writing-related) day jobs, and wondering when I got my ivory tower.

The next morning I woke up at five, and remembered that, in a few hours, I was going to BAFTA, to see the screening of a story that once lived in the mess of my brain, and that I would get to sit on stage, with actual actors, and people would listen to me as if I knew what I was doing.

And I’ve done this job long enough to know that these things are at best ephemeral and glitter for minutes, or so it will seem a year from now. But yesterday, it all glittered brilliantly. What a wonderful thing we made. 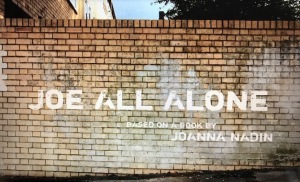