Boys. And books. And boys in books.

Like my alter ego Rachel in My (not so) Simple Life, as a teenager I fell in love frequently, swiftly and with absolute conviction. Unlike Rachel, I never had to swear off boys and their complications and contradictions, or rather never had the chance to, because, like the unnamed narrator in “The Movie Kiss” in And Then He Kissed Me my paramours were mostly of the fictional type.

My first love was Pennington. I still remember him in stark detail. The way his hair curled over his collar, defying school rules, and endless and pointless detentions from masters. His hands stuck stubbornly, sulkily in his pockets. Then the way they would come to life at the piano, dancing up and down the ivory as he practised the Liszt.

He was seventeen. And I was younger: fourteen – too young, really. But old enough to know that this was true love. That I was the only person who understood him; his moods, his genius. Ruth claimed to. But I knew deep down she wasn’t the one. I was.

But then again, if he had been, would he have been as perfect? If he’d been on the bus to Peterborough Ice Disco, would he have sat next to me? Or would he have fallen for Karen: captain of the netball team, and owner of not one but three ra-ra skirts.

I’ll never forget him. The way he made me (and hundreds more) feel. The way I still feel when I flick through the pages of KM Peyton’s ‘Beethoven Medal’. But of course love is fickle. And in the Autumn I met John in a cinema in Cambridge. Another broken, difficult boy. He was on-screen of course, in “The Breakfast Club”. But that didn’t diminish my adoration. 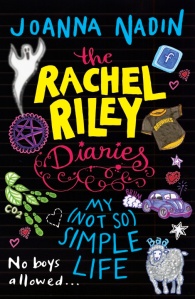 And now I’ve moved on to the real thing. It’s more complicated. But a whole world of better.

I still fall in love when I open a book though. And I’m still grateful to Peyton and Penn. They gave me my first crush. And a life-long love of musicians and artists and writers: disheveled, tortured souls, whom only I, of all the girls, could possibly understand.

My (not so) Simple Life (OUP) and And Then He Kissed Me (Walker – an anthology of YA romance) are both published today.

A former broadcast journalist and special adviser to the prime minister, since leaving politics I’ve written more than 80 books for children and adults, as well as speeches for politicians, and articles for newspapers and magazines like The Guardian, Red and The Amorist. I also lecture in Creative Writing at Bath Spa University, and hold a doctorate in young adult literature. I’m a winner of the Fantastic Book Award and the Surrey Book Award, and have been shortlisted for the Roald Dahl Funny Prize, the Booktrust Best Book award and Queen of Teen among others, and twice nominated for the Carnegie Medal, for Everybody Hurts, and for Joe All Alone, which is now a BAFTA-winning and Emmy-nominated BBC TV series. I've also worked with Sir Chris Hoy on the Flying Fergus series and ghost-written Angry Birds under another name. I like London, New York, Essex, tea, cake, Marmite, mint imperials, prom dresses, pubs, that bit in the West Wing where Donna tells Josh she wouldn’t stop for a red light if he was in an accident, junk shops, crisps, Cornwall, St Custard’s, Portuguese custard tarts, political geeks, pin-up swimsuits, the Regency, high heels, horses, old songs, my Grandma’s fur coat, vinyl, liner notes, the smell of old books, the feel of a velveteen monkey, Guinness, quiffs, putting my hand in a bin of chicken feed, the 1950s, burlesque, automata, fiddles, flaneuring, gigs in fields on warm summer nights, Bath, the bath.
View all posts by Joanna Nadin →
This entry was posted in Blog, Reading, Teen, Uncategorized and tagged Adele Parks, Cathy Kelly, Dyan Sheldon, first love, KM Peyton, Pennington, Rachel Riley, Sarah Webb, YA romance. Bookmark the permalink.

2 Responses to Boys. And books. And boys in books.