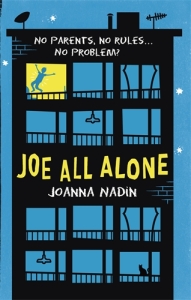 What if your mum went on holiday with her boyfriend for a week and left you home alone? What if it meant you got to play Xbox for hours on end and eat Mars bars for breakfast and jump on the furniture with our anyone throwing insults or punches? What if it meant you got to make friends with the girl across the hall and set out across Peckham like you’re Tom Sawyer and Huck on an adventure?

This is what happens to 13-year-old Joe. And here is how it begins…

I should know something’s up right from the off, because when I get in Dean isn’t on the sofa playing X-Box there’s just that big dip there instead and a stain from where he spilt Cherry 20/20 that time. And Mum has this smile on her like she’s on a TV game show, all stretched so wide you think her face is going to crack. And then she gives me a Mars bar and we haven’t had them in yonks. But my head’s too busy being happy that it’s the last day of school which means no Perry Fletcher for a whole week, and that I get a chocolate bar instead of a biscuit or bread and marg, and that I can play X-Box without getting kicked off or kicked. So it’s not until Dean comes back four hours later with his breath all sour and two plane tickets in his hand that I know any better.

And I try, but I can’t. Because there are too many other thoughts all saying stuff like, Who goes on holiday to Peckham? To their own flat? Not anyone I know, that’s for sure. Stacey Hale went to Disneyland last Christmas. And Kyle Hoskins went to Malaga yesterday with his mum and stepdad, even though Mr Pruitt sent a letter home saying it was breaking school rules when they did it in the summer.

She looks down, starts scratching at a patch of dried-out tinned spaghetti. “We can’t afford it, love,” she says. Then she looks up again. “And Dean’s got a little job while we’re out there. You don’t want to be hanging around while he’s working, do you.”

I shrug and wonder what she’ll be doing when Dean’s working, and what the little job actually is. If it’s carrying bricks like he does sometimes for Chinese Tony, or something else.

Then I remember something Bradley said, about when his mum and dad went to see his Aunty Reenie in Cyprus that time. “Nan could come,” I say. “She could stay here and look after me.”

“Don’t be daft.” Mum tries to laugh, but it comes out all mangled, like a choking noise.

“––You don’t need your nan. You don’t need anyone. It’s only a week and you’re thirteen not flaming three.” He’s back in the hollow on the sofa with his Bensons and his beer and the joystick in his hands. He shoots at something and ash falls from a cigarette onto his crotch. “Christ, when I was your age I was living in the caravan, working down the pier and smoking twenty a day.”

Mum swears at him when he says that but Dean just laughs. “Welcome to the real world, son.”

But that’s not true and we all know it.

She’s up in my face now, so close I can see those pores like little pinholes in her nose where I used to think the rain would get in. And I can smell that her breath is sour too and see her smile is thinner. And I know she needs more than anything for me to say yes so I say it.

And when she says that I feel a rush of warmth in my stomach like syrup on Ready Brek and I know I’ve done the right thing.

And the more I think about it now the more I reckon it’s like being in a book or a film or something. Like I’m Tom Sawyer. Or Huckleberry Finn even, all on my own, lighting out for the territory. Mum read me that book three times even though it’s three hundred and sixty-eight pages long. She wasn’t keen because it took three months to do them all but I begged and begged and in the end she gave in. Only the book got taken to the charity shop with my old clothes when we moved here because Dean said if I’d already heard it all what was the point of keeping it. Mum hasn’t read me anything since but Dean says that’s because I’m not a little kid.

And Dean’s right: I’m not a little kid, I’m not three, I’m thirteen, just like Huck was, so I don’t need a babysitter. And everyone at school says this kid Dane Fenwick was on his own in Chelsea House for two days when his Mum had Letisha and that was when we were only eleven. Plus it’s just for a week. That’s only five days more than Dane. And they’ll back in the blink of an eye, Mum said. Back before I know it.

A holiday and an adventure.

Only without the Mississippi or a boat or Tom Sawyer at my side.

Joe All Alone is published by Little,  Brown on Thursday 4th May, and you can order the paperback, or download the eBook via Hive …

A former broadcast journalist and special adviser to the prime minister, since leaving politics I’ve written more than 80 books for children and adults, as well as speeches for politicians, and articles for newspapers and magazines like The Guardian, Red and The Amorist. I also lecture in Creative Writing at Bath Spa University, and hold a doctorate in young adult literature. I’m a winner of the Fantastic Book Award and the Surrey Book Award, and have been shortlisted for the Roald Dahl Funny Prize, the Booktrust Best Book award and Queen of Teen among others, and twice nominated for the Carnegie Medal, for Everybody Hurts, and for Joe All Alone, which is now a BAFTA-winning and Emmy-nominated BBC TV series. I've also worked with Sir Chris Hoy on the Flying Fergus series and ghost-written Angry Birds under another name. I like London, New York, Essex, tea, cake, Marmite, mint imperials, prom dresses, pubs, that bit in the West Wing where Donna tells Josh she wouldn’t stop for a red light if he was in an accident, junk shops, crisps, Cornwall, St Custard’s, Portuguese custard tarts, political geeks, pin-up swimsuits, the Regency, high heels, horses, old songs, my Grandma’s fur coat, vinyl, liner notes, the smell of old books, the feel of a velveteen monkey, Guinness, quiffs, putting my hand in a bin of chicken feed, the 1950s, burlesque, automata, fiddles, flaneuring, gigs in fields on warm summer nights, Bath, the bath.
View all posts by Joanna Nadin →
This entry was posted in Uncategorized and tagged Bellenden, bullying, Home Alone, middle grade, Peckham. Bookmark the permalink.