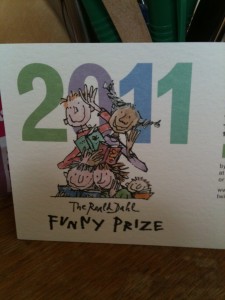 As you read this I am probably on a train to That London, wearing an inappropriate prom dress and feeling like have just ingested several bowls of porridge and fear. Or possibly (if you are late riser) I will be weeping in corner of Unicorn Theatre having got overexcited at presence of a Python (Monty variety, not snake, though snake less intimidating) and been unable to speak. In very, very improbable scenario, I will be wooping with joy having won Roald Dahl Funny Prize.

This is about as likely as me being cast as in next series of Gossip Girl (travesty, would make excellent kooky English midget. Much more interesting than Liz Hurley), as am not very woopy sort of person, plus shortlist hideously brilliant. Shortlist is also interesting as this year is very girl-heavy. Which is yah book sucks to tedious old men who annually dig out the “women just aren’t funny” routine at the same time as their Dickensian Christmas decorations.

And I was thinking maybe it was just in the olden days (by which I mean 1970s, when we still wore cross-your-heart bras, listened to Showaddywaddy and thought avocados were exotic) when women didn’t play for laughs. But then I remembered what I was reading back then (I was too young for cross-your-heart bras; more thermal vests and criminal cable knit jumpers) and it wasn’t just Charlie, and Danny and Fantastic Mr Fox. The books that would frequently reduce myself, my brother, and often my parents to sobs of laughter were the tales of a belligerent raven called Mortimer, with a habit of eating staircases and hunting for diamonds in the back of cabs. 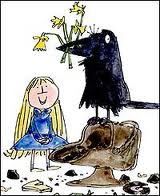 The Arabel’s Raven series by Joan Aiken is one of the reasons I write books, and why I write funny books, and proof that women have always been funny. Just that maybe not so many people were listening.

So today, whether I win or not, I shall raise a glass to Joan. Both me and Penny Dreadful owe her a huge debt. And if you’re at a loose end, you could root around your bookshelves or the library for The Escaped Black Mamba (the best Mortimer book ever). Oh, and wish me luck…

A former broadcast journalist and special adviser to the prime minister, since leaving politics I’ve written more than 80 books for children and adults, as well as speeches for politicians, and articles for newspapers and magazines like The Guardian, Red and The Amorist. I also lecture in Creative Writing at Bath Spa University, and hold a doctorate in young adult literature. I’m a winner of the Fantastic Book Award and the Surrey Book Award, and have been shortlisted for the Roald Dahl Funny Prize, the Booktrust Best Book award and Queen of Teen among others, and twice nominated for the Carnegie Medal, for Everybody Hurts, and for Joe All Alone, which is now a BAFTA-winning and Emmy-nominated BBC TV series. I've also worked with Sir Chris Hoy on the Flying Fergus series and ghost-written Angry Birds under another name. I like London, New York, Essex, tea, cake, Marmite, mint imperials, prom dresses, pubs, that bit in the West Wing where Donna tells Josh she wouldn’t stop for a red light if he was in an accident, junk shops, crisps, Cornwall, St Custard’s, Portuguese custard tarts, political geeks, pin-up swimsuits, the Regency, high heels, horses, old songs, my Grandma’s fur coat, vinyl, liner notes, the smell of old books, the feel of a velveteen monkey, Guinness, quiffs, putting my hand in a bin of chicken feed, the 1950s, burlesque, automata, fiddles, flaneuring, gigs in fields on warm summer nights, Bath, the bath.
View all posts by Joanna Nadin →
This entry was posted in Reading, Teen. Bookmark the permalink.