Bid on Bloody Everything 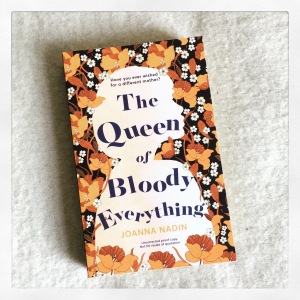 In a bid (oh come on) to raise money for Marie-Curie, whose nurses look after terminally ill patients and support their families, a bunch of authors are auctioning off signed and dedicated copies of latest releases, including books from Ruth Ware, Rowan Coleman, Julie Cohen, and moi. If you’d like the copy of The Queen of Bloody Everything, you have until March 25th to show me the money by bidding here.

A former broadcast journalist and special adviser to the prime minister, since leaving politics I’ve written more than 70 books, as well as speeches for politicians, and articles for newspapers and magazines like Red and The Amorist. I also lecture in Creative Writing at Bath Spa University, and hold a doctorate in young adult literature. I’m a winner of the Fantastic Book Award and the Surrey Book Award, and have been shortlisted for the Roald Dahl Funny Prize, the Booktrust Best Book award and Queen of Teen among others, and nominated for the Carnegie Medal for Joe All Alone, which is currently being adapted for television. I also work with Sir Chris Hoy on the Flying Fergus series. I like London, New York, Essex, tea, cake, Marmite, mint imperials, prom dresses, pubs, that bit in the West Wing where Donna tells Josh she wouldn’t stop for a red light if he was in an accident, junk shops, crisps, Cornwall, St Custard’s, Portuguese custard tarts, political geeks, pin-up swimsuits, the Regency, high heels, horses, old songs, my Grandma’s fur coat, vinyl, liner notes, the smell of old books, the feel of a velveteen monkey, Guinness, quiffs, putting my hand in a bin of chicken feed, the 1950s, burlesque, automata, fiddles, flaneuring, gigs in fields on warm summer nights, Bath, the bath.
View all posts by Joanna Nadin →
This entry was posted in 1970s, 1980s, love, romance, women's fiction and tagged 1970s, 1980s, Essex, Joanna Nadin, Mantle Books, Picador, Queen of Bloody Everything, signed copy. Bookmark the permalink.