Welcome to 4b: The Worst Class in the World

Schools might be closed for most of us, but for one long-suffering teacher, Mr Nidgett, the classroom is packed with shenanigans. That’s because he’s in charge of 4b, who are LITERALLY The Worst Class in the World, at least according to headmistress Mrs Bottomley-Blunt (who makes a noise like a horse when she is annoyed, which is a lot). 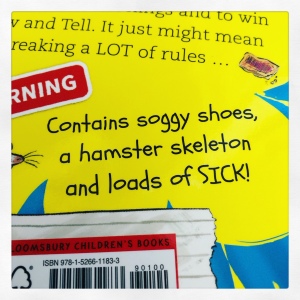 The first in the brand new series is out today, with two madcap adventures in each book including the smelly death log, ghost pigeons, a hamster skeleton, and plenty of sick.

You can buy the book here, and watch me chat about it on Youtube here.

And if you want to let me know what you think about it, you can email me at joannanadinauthor@gmail.com

‘More fun than a barrel of monkeys! A hilarious and hapless cast who I hope to see a lot more of. Perfect for youngsters to read again and again.’  (Claire Barker, author of the Knitbone Pepper series)

‘A modern Bash Street Kids, only with heaps more ha-ha, and lot more heart, this is guaranteed to make you LOL in class. For a little book, it makes a big impression.’ (Snort)

A former broadcast journalist and special adviser to the prime minister, since leaving politics I’ve written more than 80 books for children and adults, as well as speeches for politicians, and articles for newspapers and magazines like The Guardian, Red and The Amorist. I also lecture in Creative Writing at Bath Spa University, and hold a doctorate in young adult literature. I’m a winner of the Fantastic Book Award and the Surrey Book Award, and have been shortlisted for the Roald Dahl Funny Prize, the Booktrust Best Book award and Queen of Teen among others, and twice nominated for the Carnegie Medal, for Everybody Hurts, and for Joe All Alone, which is now a BAFTA-winning and Emmy-nominated BBC TV series. I've also worked with Sir Chris Hoy on the Flying Fergus series and ghost-written Angry Birds under another name. I like London, New York, Essex, tea, cake, Marmite, mint imperials, prom dresses, pubs, that bit in the West Wing where Donna tells Josh she wouldn’t stop for a red light if he was in an accident, junk shops, crisps, Cornwall, St Custard’s, Portuguese custard tarts, political geeks, pin-up swimsuits, the Regency, high heels, horses, old songs, my Grandma’s fur coat, vinyl, liner notes, the smell of old books, the feel of a velveteen monkey, Guinness, quiffs, putting my hand in a bin of chicken feed, the 1950s, burlesque, automata, fiddles, flaneuring, gigs in fields on warm summer nights, Bath, the bath.
View all posts by Joanna Nadin →
This entry was posted in creative writing, Fiction, middle grade, Reading, Uncategorized and tagged Bloomsbury, Funny, humour, Joanna Nadin, MG, reading, Rikin Parekh, school. Bookmark the permalink.