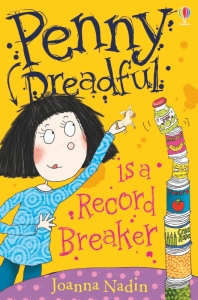 I have never been a high achiever. Until I started writing (thanks to Penny Dreadful, Solomon Smee and Maisie Morris), the only two things I had won were a Toners hair dye from Jackie magazine in 1982 and the umbrella and yoghurt pot race in the St Mary’s primary annual sports day (the other “races” including “eat a doughnut hanging from a string without using your hands”. This was pre Jamie Oliver, obviously).  It wasn’t through lack of trying, just that perseverance and determination still only ever got me second place.

But now, at the age of *mumbles*, I am finally attempting to get my name in the record books, quite literally. As, to mark World Book Day, and the release of Penny Dreadful is a Record Breaker, I will be attempting to conduct the world’s biggest ever literacy lesson and win a Guinness World Record. And, while I am not sure the process will be quite as bonkers as Penny’s attempts at standing on leg for the longest time ever, or building the highest ever tower out of some soup tins and a plastic horse, I do know it will be exciting.

So, to find out if I, and KES Junior School, manage to concentrate for a full half an hour, check back here in a month’s time. And to find out if Penny manages to stay on the right leg, or get the horse to stay on top of the tin of asparagus consommé, check here right now…

A former broadcast journalist and special adviser to the prime minister, since leaving politics I’ve written more than 80 books for children and adults, as well as speeches for politicians, and articles for newspapers and magazines like The Guardian, Red and The Amorist. I also lecture in Creative Writing at Bath Spa University, and hold a doctorate in young adult literature. I’m a winner of the Fantastic Book Award and the Surrey Book Award, and have been shortlisted for the Roald Dahl Funny Prize, the Booktrust Best Book award and Queen of Teen among others, and twice nominated for the Carnegie Medal, for Everybody Hurts, and for Joe All Alone, which is now a BAFTA-winning and Emmy-nominated BBC TV series. I've also worked with Sir Chris Hoy on the Flying Fergus series and ghost-written Angry Birds under another name. I like London, New York, Essex, tea, cake, Marmite, mint imperials, prom dresses, pubs, that bit in the West Wing where Donna tells Josh she wouldn’t stop for a red light if he was in an accident, junk shops, crisps, Cornwall, St Custard’s, Portuguese custard tarts, political geeks, pin-up swimsuits, the Regency, high heels, horses, old songs, my Grandma’s fur coat, vinyl, liner notes, the smell of old books, the feel of a velveteen monkey, Guinness, quiffs, putting my hand in a bin of chicken feed, the 1950s, burlesque, automata, fiddles, flaneuring, gigs in fields on warm summer nights, Bath, the bath.
View all posts by Joanna Nadin →
This entry was posted in Blog, Reading and tagged Bath, Guinness World Record, Joanna Nadin, Penny Dreadful, Usborne. Bookmark the permalink.

1 Response to Joanna Nadin is a Record Breaker (potentially)