Everybody Hurts – a story of love (and ping pong) 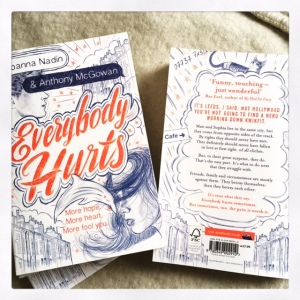 It began, as so many great love stories do, with an argument. This time, however, there was no prom, or even eyes meeting across a bar; rather boy (Anthony McGowan) met girl (me) on Meg Rosoff’s blog, shouting about Jane Austen, and bonfires and something to do with the colour pink. The precise details escape me now, though the row itself made the pages of the Times, but underneath the sniping something must have struck us both, because six – seven? – years later we’ve made something pretty amazing together. Everybody Hurts took three years to write – itself a labour of love, each of us ping-ponging chapters back and forth, not knowing entirely where our story would take us, other than a disused pipe in a Leeds back street. But every minute of waiting and wondering what the next ping would bring was worth it. In the words of the wondrous Rae Earl: ‘Two masters of their craft have created something so special here . . . I didn’t want to leave Matt & Sophia . . . How refreshing to read about this subject matter in a way that feels so real. Funny, touching – just wonderful.’

You can buy the book here. And read the opening chapter below.

One upon a time, I made a list of things I do not believe in. There were a bunch. Hey, I’m a cynical kind of girl. But these, in no particular order, were my top five.

If you believe in that last one – the whole eyes-meeting-across-a-crowded-room shit – you might as well start arguing for the existence of the tooth fairy, Santa or Jesus. It just goes against science, as well as the law that unless you share some basic grounding in music appreciation then you’re pretty much doomed to failure. And I know that both liking the hidden track on some obscure Deaf Beats album doesn’t mean you’re fated, but it’s better than basing an entire relationship on the fact your stomach lurches because of the way his hair falls into his eyes. What if it’s just indigestion?

Lexy said I was being provocatively cynical (she found that one that on a blog). And I know she thought it was just the tumour talking. But then she would. Because she counts on life playing out like it’s Hollywood-scripted and has fallen in love more times than she’s fallen off her latest diet. Jesus, she spent the whole of GCSE year looking for her Heathcliff; worked her way through half a dozen of boys from the wrong side of the tracks in the hope one of them would have leading man potential. It’s Leeds, I said, not Hollywood. You’re not going to find a hero working down Kwikfit.

Besides, Heathcliff’s a jerk. And love blind at best, and a deceit at worst. The idea that we’re all half-formed, lost without a boy by our side, or preferably one step ahead of us opening doors and fighting wars? Screw that, I said to anyone who would listen. There’s nothing missing from me. I’m whole, complete, and I can open my own doors and clear my own pathways. Thanks all the same. No The Great Gatsby is where it’s at. Just fine dresses and gin and everyone playing at being someone else. Love in West Egg is so clearly an illusion, and if you think for a minute you can cross that great divide in disguise or otherwise then you’re a fool, nothing but a beautiful fool.

Until I clocked him. And he clocked me. And my steadfastly cynical world was tilted swiftly off its axis, and I landed, bruised, bewildered, in a bed of bloody roses.

I didn’t see that one coming.

Not on a wet Friday afternoon in March against the Dettol-scented backdrop of a hospital canteen.

Not with a boy nearly a year younger than me and a whole record collection short of anything resembling taste.

And I, it turns out, am a fool after all.

A former broadcast journalist and special adviser to the prime minister, since leaving politics I’ve written more than 80 books for children and adults, as well as speeches for politicians, and articles for newspapers and magazines like The Guardian, Red and The Amorist. I also lecture in Creative Writing at Bath Spa University, and hold a doctorate in young adult literature. I’m a winner of the Fantastic Book Award and the Surrey Book Award, and have been shortlisted for the Roald Dahl Funny Prize, the Booktrust Best Book award and Queen of Teen among others, and twice nominated for the Carnegie Medal, for Everybody Hurts, and for Joe All Alone, which is now a BAFTA-winning and Emmy-nominated BBC TV series. I've also worked with Sir Chris Hoy on the Flying Fergus series and ghost-written Angry Birds under another name. I like London, New York, Essex, tea, cake, Marmite, mint imperials, prom dresses, pubs, that bit in the West Wing where Donna tells Josh she wouldn’t stop for a red light if he was in an accident, junk shops, crisps, Cornwall, St Custard’s, Portuguese custard tarts, political geeks, pin-up swimsuits, the Regency, high heels, horses, old songs, my Grandma’s fur coat, vinyl, liner notes, the smell of old books, the feel of a velveteen monkey, Guinness, quiffs, putting my hand in a bin of chicken feed, the 1950s, burlesque, automata, fiddles, flaneuring, gigs in fields on warm summer nights, Bath, the bath.
View all posts by Joanna Nadin →
This entry was posted in Blog, Reading, Teen and tagged Anthony McGowan, Atom Books, Everybody Hurts, Joanna Nadin, Leeds, love, teen cancer, YA romance. Bookmark the permalink.